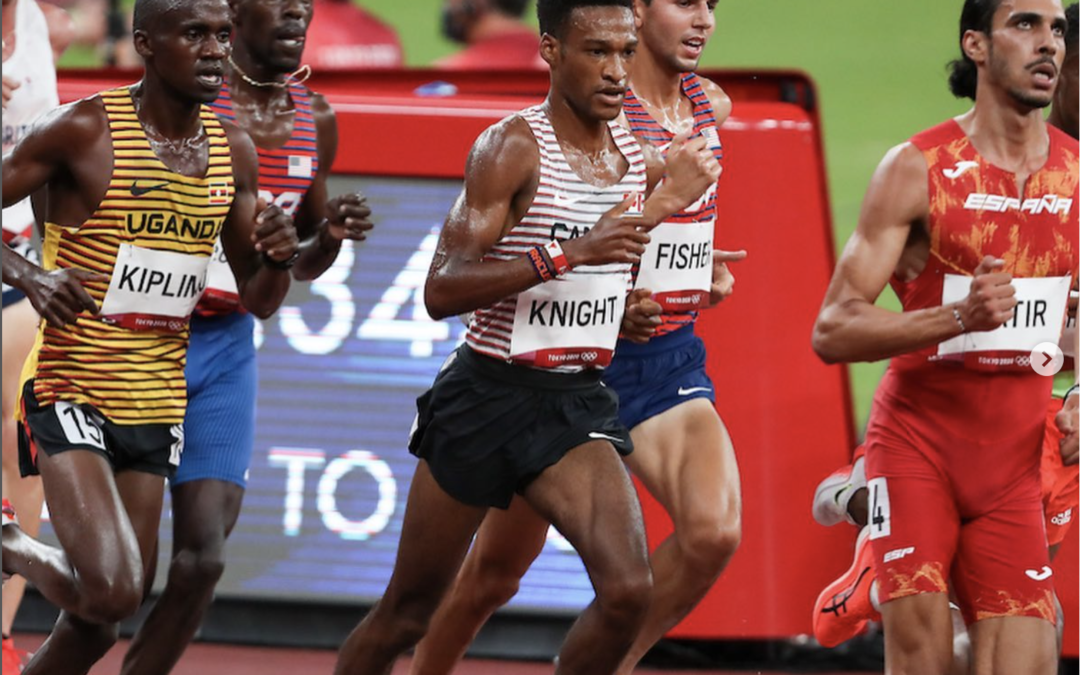 “Don’t be scared to fail, I fail all the time” – Justyn Knight

At the end of the February, we capped off The Altitude 5K Challenge. This was a challenge for runners of all levels to see who can run the fastest 5km on the treadmill when the altitude chamber is set to 9000ft elevation.

After a month that saw all sorts of runners from the community come out and participate in some friendly competition, we were left with our winners. Congratulations to our top runners – Dan Rowland and Catherine Dawe – on running the fastest times of 18:20 and 23:00 respectively in the male and female categories.

To top off our event, I was able to do an interview via Instagram live with one of the world’s fastest 5km runners, Justyn Knight. To check out the full interview – head on over to our Instagram page here or view the full clip at the bottom of this blog post. It was full of laughs, heartfelt words and some “off the track questions.”

If you are unfamiliar with Justyn, he has a fairly impressive resume on the track. Justyn competed at the Tokyo Olympics, placing 7th overall in the 5000m race. He’s also the Canadian record holder for the indoor 1500m. He holds the second fastest 5000m in North America running a time of 12 minutes and 51 seconds. He’s a two-time world finalist, two-time NCAA champion and jokingly the best self-proclaimed dual athlete in the Greater Toronto Area (he actually might be right).

In today’s blog post, I will be highlighting some of Justyn’s responses in case you don’t have time to watch the entire interview. I get you are probably busy!

All Things Justyn And Running

“Was running always your passion?”

To some people’s surprise, for quite some time running was NOT his passion. Justyn was all about the “balling life” and lived and breathed basketball for much of his life, including high school. He actually got into running by accident, well sort of an accident. Although he was a stand out basketball athlete, he was not doing well in gym class, and to boost his mark he had to go run 5km. Wearing only basketball shoes and shorts, he started his run and set a 5km school record. From there, he realized that he should give running a shot. But this came at a cost of choosing between running and basketball. I think he made the correct decision.

“What are some tips for someone just getting into running?”

Truly falling in love with running is something Justyn thinks is extremely important, it is not something you can do for 10 hours all day like shoot hoops, pucks or playing volleyball. It is a different type of fun, so you have to find ways to keep it fun. He also said, “Notice and internalize your wins in running, those will help you keep going no matter how small they are.”

“What are your tips for someone pursuing a career in running?”

Pursuing a career or any professional sport is extremely difficult and not glamourous like people might think it is. There is a lot of time spent in the proverbial “trenches of training”. You are on a journey that won’t be a straight line to the top. Don’t compare yourself to others because you have no idea where that person is on in their journey. We also live in a day and age of social media.

People posting their workouts can create a comparison culture. Justyn felt this when he would see people training paces that he wasn’t doing and sometimes felt discouraged. Running is very independent, so have faith in the way you are training. The greatest sprinter of all time – Usain Bolt – didn’t have very nice facilities or the best technology. So fancy isn’t always better.

Justyn has his own little spin when it comes to setting goals. You have probably heard of the acronym S.M.A.R.T goals – with the “R” standing for realistic. Well, when you compete at the highest level you probably have to do things a little differently and cliché acronyms might not work. That’s why Justyn talked about setting unrealistic goals for himself.

Of course, it takes some mental toughness to know you that you will likely fall consistently short of your goals. Justyn’s theory is that if he shows up to practice and trains for that unrealistic goal, falling short of his goal will still put him in a place of success. Races rarely go perfect. Even if you did everything right you can’t control what others do in the race. In his mind, if he just set realistic goals, he might not perform at the level he wants to.

“People will say that was an L (loss), but to me that L stands for lesson, and you can always learn from a loss” – Justyn Knight

People looking from the outside in often just see Justyn as this incredibly successful runner. You hear the stories of the winning moments far more than the losses he had endured through his running career. He had two pivotal moments in his running career. The first one was during college when he first paced 143rd and then one year later came in 4th. The second was when he turned pro, he came in 25 pounds over race weight, running his slowest time ever and placing dead last.

He kept that race bib wrote his time on it and put it up on his fridge as a reminder of the disappointment he felt, and what he was working towards everyday. Justyn has a unique way of dealing with his failures. He doesn’t simply ignore them. But rather, immerses himself in his feelings and “feels bad” for himself for around 2 days before he bounces back. Once he bounces back, he remembers not to take today for granted because it will impact tomorrow.

Justyn would not be where he is today if it wasn’t for his talent and incredible work ethic. He shared some of his sweetest memories of racing. In 2017, he went to the world championship finals and was racing against people he watched on TV. These were people who he looked up to as role models.

Prior to the race, he looked at the final heat and felt like he had no business being in that race. Yet he still placed in the middle of the pack in 9th position – a milestone so young in his career. His all-time favourite memory was not at the Olympics. But rather winning a national championship with his team at Syracuse University. Running is a very independent sport. But when you win as a team and you can share that experience it just makes it so much more magical.

“Who is your childhood hero”

Michael Jordan and Kobe Bryant, their work ethic was unmatched and that’s what I strive for.

“If you were to pick an animal that most closely represents your personality traits, what are you choosing?”

My little cockapoo dog, we both get up to no good.

“If you were going on a first date where is the first date taking place?”

Couldn’t give away his secret…..but he does love the cheese cake factory.

“What is your middle name”

“What is your go to pump up song”

“What is your pre race meal?”

It was chicken parmesan in college but now I don’t have to have it anymore because competing internationally you don’t know what food you will have access to.

“Do you do any cross training?”

He does weight training and plyometrics, but doesn’t really know his plan, just does what the coach tells him to do.

(As someone who trains lots of athletes, I can verify this happens more than often, even at the professional level.)

“Would you ever do a group run led by yourself for the local fans of Toronto?

Yes! As long as people are going to show up….so if you are in the Toronto area and love running be on the look out for this post.

It was an absolute pleasure to interview Justyn Knight, he is truly a one-of-a-kind person. He’s down-to-earth, humble and fiercely competitive. But he also knows not to take life so seriously and have some good laughs. He is a true leader in his community on and off the tack. Thank you Justyn!

You can follow him on Instagram @justyn.knight for more updates on his career and maybe a chance to participate in a community led run by the legend himself, stay tuned!

TJ McInnes is one of our Strength and Conditioning Coaches here at Altitude Athletics. He has a strong background in strength and conditioning and high performance coaching and is passionate about developing and delivering exercise programming that is tailored to his clients wants and needs. He has a particular interest in the athletic population and is constantly seeking a better understanding of the art and science of effective coaching.

A strong interest in sport and physical activity has led him to complete his Bachelor of Arts in Kinesiology and Physical Education at Wilfrid Laurier University in Waterloo. He went on to complete his Masters of Professional Kinesiology at the University of Toronto, with a specialization in high performance. He has since completed additional certification in a wide range of areas of nutrition, sleep and recovery, functional strength, neurology, biomechanics and exercise selection.

Altitude Athletic is Toronto’s first and one of the largest altitude training facilities in the world. We’re here to help you prepare for your next big climb, event or meet your health goals. Click here to learn more about what we do at Altitude.